<A Still from the BBC program “The Outlaws”>

A piece of graffiti art created by Banksy was painted over by actor Christopher Walken in the final episode of BBC series “The Outlaws”.

This TV show is the six-part comedy-drama, which Stephen Merchant co-created with US writer and producer Elgin James, and also directed, follows a group of misfits renovating a derelict community centre in Bristol, as part of community service for crimes they have committed.

As Walken continue paying their debt to society in the finale by painting over graffitied walls, his character, Frank, a small-time career criminal, encounters the rat image accompanied by two cans of spray paint and Banksy’s signature.

He told his probation officer, “Diane, look at this rat I found.” She told him to do what government officials had ordered him to — paint. With a final shrug, Frank took his roller and blotted out the graffiti with thick, beige stripes. 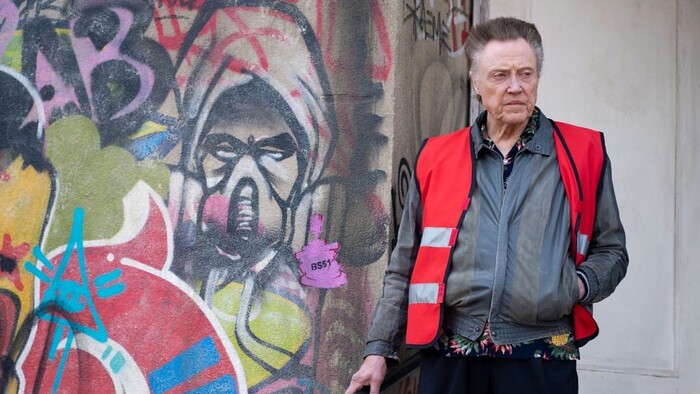 A spokesman for “The Outlaws” told the Guardian: “We can confirm that the artwork at the end of “The Outlaws” was ‘an original Banksy’, and that Christopher Walken painted over that artwork during the filming of the scene, ultimately destroying it.”

The production company offered no more details, and a representative for Banksy did not respond to a request for comment.

Over the past three decades, Banksy has become one of the most famous and successful artists in the world. His paintings sell for millions, often appearing suddenly in unassuming places across the globe. The artist, who has fiercely protected his anonymity, legitimized street art as a form of expression and political commentary in what’s been called “the Banksy effect.”