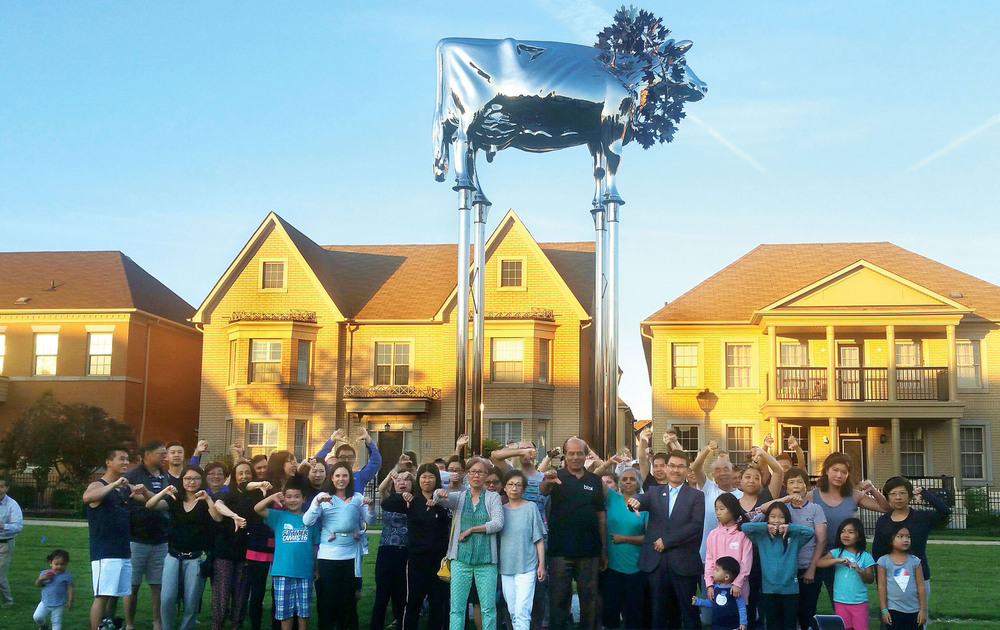 Residents of Cathedraltown protesting in front of Charity, (Courtesy: National Film Board of Canada)

The National Film Board of Canada has partnered with the Museum of Contemporary Art (MOCA) Toronto on the new digital artwork ‘Charity’, created by the Toronto-based collective of Parastoo Anoushahpour, Faraz Anoushahpour and Ryan Ferko. Available free online globally on NFB.ca in English and French starting September 29, ‘Charity’ is an interactive documentary that explores the controversy and bureaucracy around an oversized chrome cow placed in a suburban Ontario neighborhood as public art, raising questions about the identity of a place and who determines it.

In 2016, a sculpture of a cow was placed in the midst of a Canadian suburban development and residents hated it. One day, the citizens of Cathedral town, a planned suburb of the city of Markham, Ontario, woke up to find a chromatic cow shimmering outside their windows. They hated the cow. The sculpture, ‘Charity’, and the ensuing effort by residents to remove the public artwork, is the subject of an interactive documentary, also titled ‘Charity’, by Parastoo Anoushahpour, Faraz Anoushahpour, and Ryan Ferko, a collective of collaborative artists.

‘Charity’, the project, was first conceived when the trio was selected for the National Film Board of Canada and the Museum of Contemporary Art Toronto Partnership Project. Their selection meant not only that the work will be presented as part of the Museum of Contemporary Art Toronto’s exhibition “Greater Toronto Art 2021” but that the National Film Board would also produce their artwork. GTA21 is an interdisciplinary commissioning and producing program that works to examine the transformations our social realities have had on our cities and our towns. 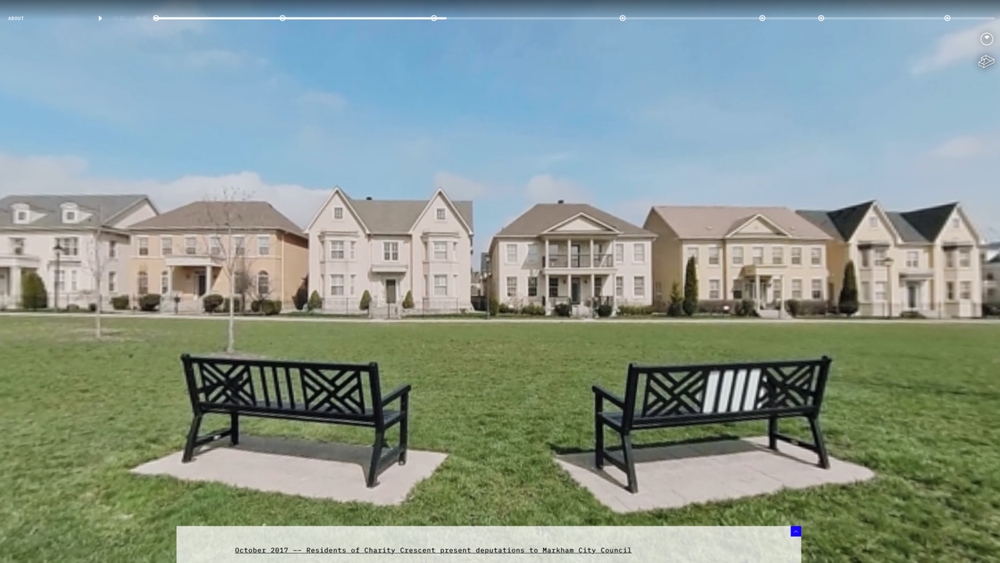 Two park benches look out at the location where the Charity sculpture once stood. (Courteys: National Film Board of Canada)

‘Charity’ looks at this unlikely controversy surrounding suburban public art, focusing on the bureaucratic processes that unfolded over several years in the Markham City Council as a way to consider the broader forces at play in our municipal democracies. Produced by the NFB in partnership with MOCA Toronto, ‘Charity’ is an immersive and innovative case study on the challenges of representing multiple subjective experiences and histories simultaneously.

As Jeremy Mendes, the NFB producer who worked with the artists, describes the benefits of the initiative, “Imagine a public artwork where the artists only made the art but did not have to deal with engineers, municipalities, lawyers, foundries, etc…” Mendes, along with the team at NFB, worked alongside the artists to make their project come to life, from inception to completion and beyond: They provide marketing for the completed project as well. The 360-degree video environment was also made possible through a collaboration with NFB’s English Program Digital Studio, which helped the artists execute the more technical aspects of their project.

‘Charity’ was launched as a 360 web documentary on September 29. To experience the project, visit nfb.ca/charity.