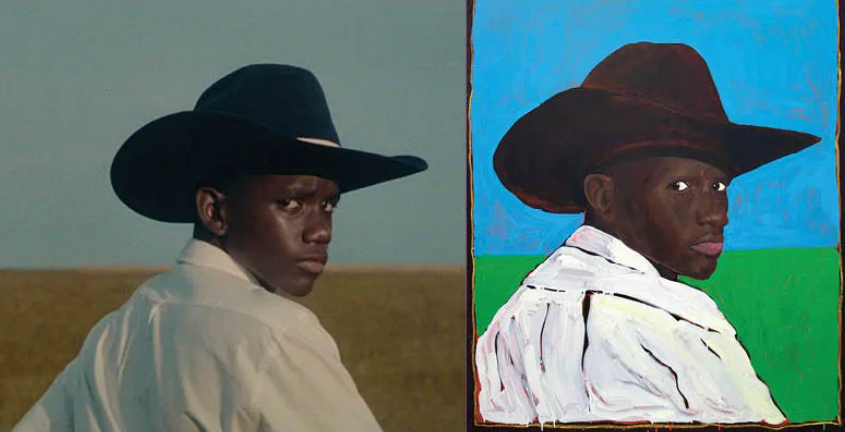 Over the weekend, eagle-eyed TikTok and Instagram users noticed similarities between several paintings on view at the Guggenheim Bilbao and photographs taken by a queer Black artist, raising concerns of plagiarism.

The paintings are by Basque artist Gala Knörr and depict various views of a Black cowboy. They look like frames of a stop motion film. In one, his back faces the viewer, his gaze directed at a serene pastoral setting. In the next, he’s glancing backward.

In its press materials, the museum writes that Knörr “revisits the history of the American West by reviving figures that may have played a prominent role in their day but have been forgotten in popular US culture.” With the paintings of the cowboy, the museum continues, she “revises through the image of the young African-American woman Brianna Noble on horseback, which she found among the photographs of the protests that arose in the USA within the context of the ‘Black Lives Matter’ movement after the murder of George Floyd.”

Critics online countered that the images are ripped straight from the short film Blue by the Brooklyn-based multidisciplinary artist Dayday. The movie stars Ezekiel Mitchell, a young Black cowboy recounting his entry into bull-riding. Throughout, speakers weave his personal story into the history of the Black West. In its opening minutes, he stares ahead at the green landscape before noticing the camera. The Guggenheim’s materials for Knörr’s work did not explicitly reference Blue.

Art consultant and curator Alexis Hyde was among the first to address the controversy online. On TikTok, Hyde highlighted attempts by Instagram users to bring the alleged offense to the attention of Knörr and the museum.

“This white woman artist is out there trying to talk about erased Black history while she is actively erasing Black history,” Hyde said on TikTok. She later said TikTok deleted the video, claiming it was “bullying” though her claims were echoed by the user Bona Bones, whose post about Knörr and Dayday’s works has received more than 90,000 likes.

Knörr’s New York gallery, Pablo’s Birthday, acknowledged the controversy on Instagram, writing, “As an art space, collective, and individuals, we have been taking the time to get most of the facts and to reflect on how the gallery can do better as an art world entity to promote mutual respect and foster narrative of equity. Second, we want to apologize to [Dayday] and acknowledge the work they have created.”